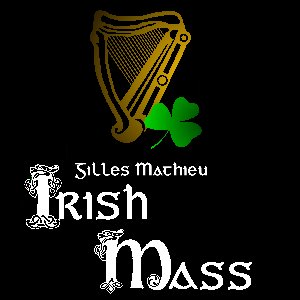 In this piece written between 2005 and 2006, the classical musical form of the Catholic Mass meets a style inspired by traditional irish music, using a mixed SATB choir with classical and traditional instruments such as Uilleann Pipes, Whistles and Fiddle.

The musical form called "Mass" generally corresponds to liturgical music and songs of the catholic mass at large. In classical music, these prayers and invocations translated to music are generally split in five parts:

Sometimes -as this is the case here- the Sanctus can be continued into a Benedictus. The two movements are then often associated and enchained. A part of the liturgical text is even common to both.
These sequential movements follow the canon of the latin mass, and form together what is called the Ordinary of the Mass, whereof the text is fixed

Particularity of this mass is to use an Irish Gaelic version of the text instead of the usual latin version.

As of 2017, two new version of Irish Mass have been produced, using the Latin and English version of the Ordinary of the Mass.

Glóir do Dhia sna harda. Agus ar talamh síocháin do lucht a pháirte.
(Glory to God in the highest, And on earth peace to people of good will.)
The bombastic beginning soon gives way to a mysterious and tortured atmosphere, auspicious to a dance of leprechauns and fairies... which unconsciously reminds us that Irish catholic culture keeps many traces of its own mythology.

Creidim in aon Dia amháin, an tAithair uilechumh-achtach a rinne neamh agus talamh agus an uile ní sofheicthe agus dofheicthe
(I believe in one God, The Father Almighty, Maker of heaven and earth, and of all things visible and invisible.)
Archetypal meditation song, the Credo takes its inspiration from old celtic monodies, that one easily imagines being sung in the middle of a desert heath... The howling winds and the sound of waves crashing on the rocks echo back to this ancestral profession of faith.

Is beannaithe an té atá ag teacht in ainm an Tiarna.
(Blessed is He Who comes in the Name of the Lord.)
Beyond its cinematic character, this melody follows the line of many celtic ballads, and ends with the jig already heard at the end of the Sanctus.

Texts, scores and other resources

Texts and complete scores are available on the "scores" page

A recording of one of Irish Mass' first performances (February 2007) is available below (and also from the MP3 page.) A few videos from different concerts are also available on the videos page.