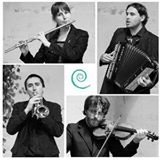 Korvapuusti is a multifaceted band from the Lyon area that plays traditional and popular music from allover the world. The band was born in 2004 from a common and shared passion between student friends for musical eclectism and traditional music.

Through time, occasions and movings, I sung or played in different groups. Here is a non-exhaustive list: